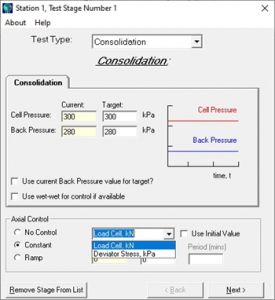 The Axial control option gives the user the ability to measure sample deformation during standard isotropic consolidation, following the deformation of the specimen by targeting a very small seating load. This control can be defined either as a load target in kN or as a Deviator Stress in kPa. Optionally, a target of 0kN Load or 0kPa Deviator Stress can be applied if used in conjunction with extension topcaps.

The Axial control option also gives the user the functionality to ramp up to and maintain an Isotropic condition during Saturation and Consolidation for more advanced tests.

The updated software module has been tested in the field and has received some great feedback.

The software update is free to all customers with the Satcon module, you just need to download the latest copy of GDSLAB which, can be found here. If you interested in purchasing the Satcon module, please contact one of our sales team at sales@auscal.com.au

For further information, pricing and delivery on this range, contact ACS via below form